In March, as all major sports around the world weighed the pros and cons of continuing to hold games, it became abundantly clear that 2020 may be the year that never was.

For many, being a fan and watching our favorite teams is an integral part of our lives, so the pause left us searching for a replacement. Recognizing there was a void that needed to be filled, Netflix and ESPN graciously expedited the release of The Last Dance, a ten-part documentary following Michael Jordan’s storied career and the 97-98 Chicago Bull’s title run. For those that may not know, Michael Jordan, or MJ, is widely considered the greatest basketball player to ever play the game and boasts an impressive 6 titles.

As you watched, one couldn’t help but be in awe of the legacy he had created. MJ’s career spanned 1072 games during which he averaged 30 points, 6 rebounds, and 5 assists per game. Almost more impressive than the consistency with which he played is how many times he scored his exact average. In 15 seasons, MJ scored his career average a grand total of zero times. Not once. This phenomenon isn’t unique to Michael; other basketball stars like Lebron James and Kobe Bryant have never hit their exact career average. Another big name that has never returned its long-term average is the S&P/TSX Composite Index, Canada’s benchmark stock index which is comprised of the largest 250 companies in our country. 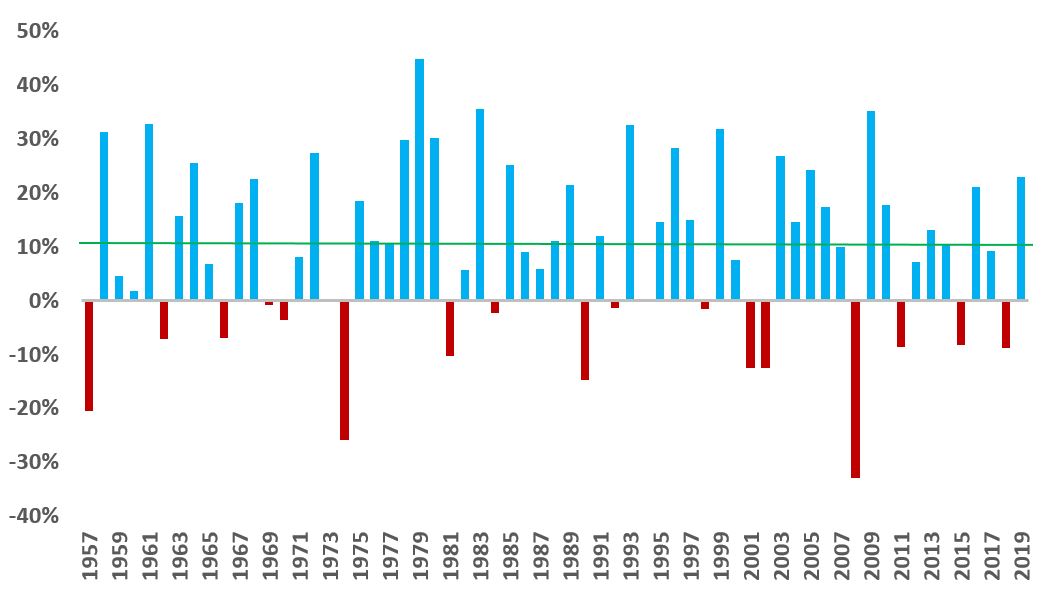 During the 62-year sample period, the index and its previous iterations have never returned the long-term average annual return of 10.21%. Over that time, it has seen large swings, with the highest one-year return being nearly 45% and the lowest being negative 33%. Michael Jordan has also experienced off nights and standout performances: his career low was 8 points and the high was 69 points, with both games being against Cleveland. Michael’s worst performance came 7 days after returning from a broken foot. Similarly, the S&P/TSX’s worst return came in 2008, deep in the great financial crisis.

While a -33% and an 8-point night may seem disastrous at the time, it’s important to understand that these are well within the range of possible outcomes. What would have happened if the Chicago Bulls management had decided to trade MJ after that night in 1987? They would have missed out on 6 titles. The same holds true for an investor who decides to sell their portfolio after a year of negative returns. By remembering the road to a great long-term average is not a smooth path, but a bumpy track with unpredictable global events and injuries mixed in, it can help you to ride out the inevitable ups and downs that will come your way.